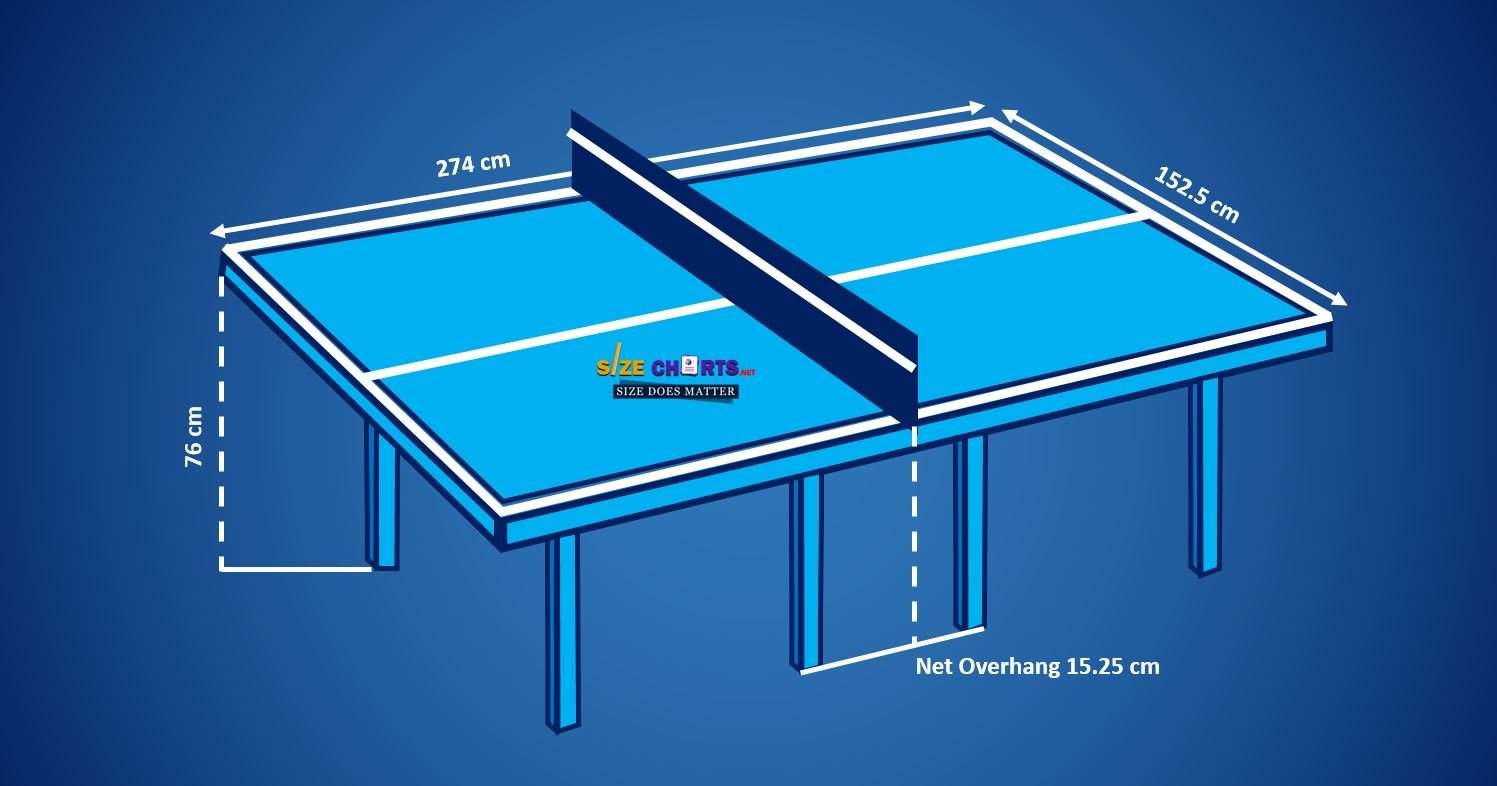 One thing that differentiates table tennis from other indoor sports is the space required is way too small and for the same reason, it could be played almost everywhere.

For recreational purposes, you can install a Table Tennis or Ping Pong Table anywhere and play with a bit of room availability, but when it comes to professional gaming, it should only be played in a dedicated place not only enough for table tennis table space but with proper facilities and gaming experience.

We will dive deep into this matter and explain each and every bit you should know about table tennis tables, the materials they are made of, the types of tables availability and the space it requires for proper gaming affair.

Both the singles and doubles play on the same playing surface. But when the doubles play, the upper surface is divided into two equal parts with a vertical line. It distributes a single upper surface in equal dimension into two halves by a white centerline. This 3 mm wide white line runs parallel with the sidelines of the tabletop.

It comes rectangular in shape, and there is a white sideline on the matte surface and a dark-colored court on each side. It measures 2cm wide along each 2.74m edge and features a white end line, 2cm wide on the sides, along each 1.525m edge. Here is a visual representation to make you understand better.

Two clamps along with supporting posts are attached to the table.

The six feet long net is mounted over the playing surface with the clamps and the supporting post in an upright position.

It is so mounted that 15.25cm of the net crosses the sideline and hangs outside the tabletop. The exceeding net must not be beyond 15.25 cm as per the standard rule.

Table tennis has its variations. Sometimes it is the style and sometimes, depending on the grip that carries its divergences. Here, we discuss a few of the popular table tennis types.

Ping Pong is not exactly the same as table tennis, but it is definitely similar and belongs to the same playing genre. It is a different term used for tennis. It is played by juniors and children. On the other hand, table tennis is a professional game. The rules for both games are the same. It is the level of the game and the seriousness that creates the differentiation.

The reverse table tennis is the usual table tennis but in reverse. In this game, before a player hits the ball and passes it to the other court, the ball must first touch the court of an individual who is hitting it, and then it should directly go to the opponent.

When a player plays table tennis in front of the opponent, they try to pressurize the other player with topspin, defend the served ball with backspin, and sometimes also merge side spin with all of them. Here, the player can use different table tennis spins, but when it is advised that only one kind of spin can be utilized in the game, it becomes challenging for both players. And that kind of game is called ‘Monospin’ table tennis. It is where only a single spin can be operated.

Variation according to the grip.

The penhold grip is a certain type of grip where the bat is held just like a pen is held in hand. Here, only the index finger and the thumb is used to hold the pedal of the bat and the rest of the fingers support the bat. It is considered one of the challenging grips. However, Olympic games, tennis championships, and World Cups have seen the utilization of accurate penhold grip and equally encountered success.

Players from the Asian region are often seen using the penhold grip.

The pen holder grip is not a single style it has its divisions. They are called by the following name:

Unlike other tennis players, two-thirds of players from the Asian region and the Europeans use this shakehand grip. It is one of the traditional surviving groups. Here, the index finger is used to hold the paddle perpendicularly. It makes sure the power is evenly distributed on the forehand. But it creates a crossover between the forehand and the backhand short, which negatively impacts. However, it has its advantages which is why it is still now used.

It has its style variations which are named as:

It is a kind of Table Tennis where a wall is used. Here, the table tennis is placed near the wall to create a new dimension. It is so created to have a wall on each side.

The Lob Ping Pong is an interesting version of Table Tennis. Here the table net is higher and their height creates a curve. The players should hit the ball with more force than usual. And it is definitely a challenging game as it has a higher net. 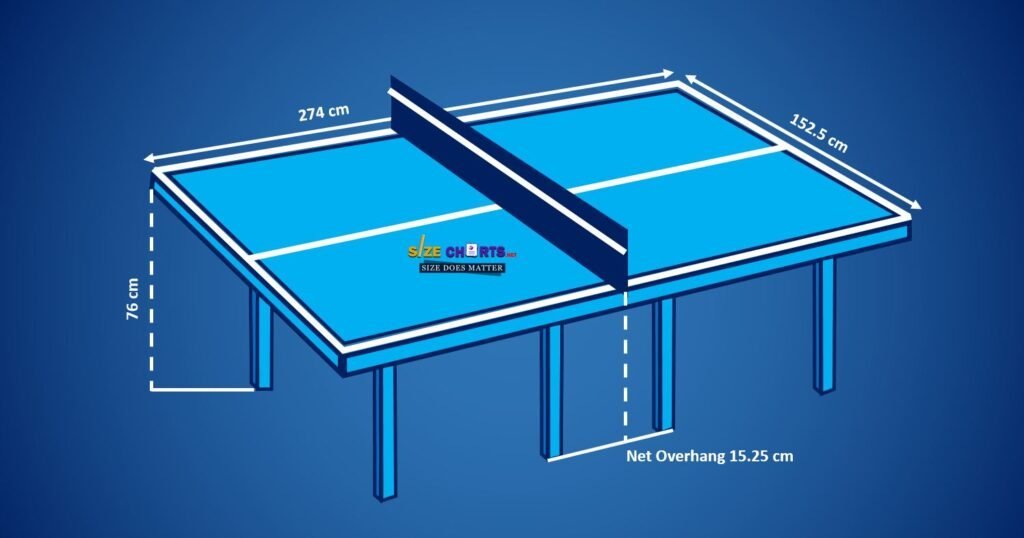 Table Tennis Court Dimensions – What Measurements Should I Know For My Reasonable Use?

There are standard official sizes for table tennis courts, but it varies according to the use and kind of games. Since you are looking for the exact room dimensions you will need for your reasonable use, it is better to go through all kinds of dimensions where the table tennis is played, and accordingly, you can choose the one convenient for you.

a. In the local tournament.

When table tennis is played in a local tournament or local League then the minimum area required to place the table tennis would be 9m x 5m which is 30 feet x 16.6 feet.

b. For recreational playing.

c. For the National League.

When table tennis is played at the National level the room remains of size 10 m x 5m.

d. For the National tournament.

When table tennis is represented in world championships, in international events, and Olympic games, the table tennis court is always off size 14m x 7m which stands as 46 feet x 23 feet.

If it is for your house, you are planning to get table tennis, then it should be of recreational playing setup or else you would not be able to be flexible or comfortable.

The most crucial thing you need to cater to before buying table tennis is to know the size of room required to fit it in. If you buy table tennis without having any idea of the amount of extra space you would require to be able to play flexibly, it will create a great problem.

The aforementioned additional measurement is the minimum area required, but you should always have some more space. And especially when it is for the recreational game, you should arrange a room that would have double the table tennis space or how everybody will have fun in it.

If it is for the family only then the 4 x 3 feet measurement would be enough.

The standard thickness of a table tennis table

The standard thickness of a table tennis table is 19 mm, which is 3/4 inch. Any tabletop with a thickness less than 19 mm has the possibility of crashing down and it will wrap up easily since it would not be able to hold the pressure of the constant bounce of the ball.

Ping pong tables’ weight is not fixed, and they vary quite a lot depending on the factors like the type of table you opt for or the size of the table.

What is The playing surface yields of a Standard Table?Tennis?

According to the guideline, when the ball is dropped on a standard table tennis from a height of 30cm, it should have about 23cm of uniform bounce.

What is table tennis table dimensions in cm?

What is the Table tennis table dimensions in Inches

Whats is the Table Tennis Table Dimension when folded?

Once we fold up the table one side measures at 5 feet long by 5 feet wide. And any standard table tennis table approximately stands at total height of 5 1/2 to 6 feet tall.