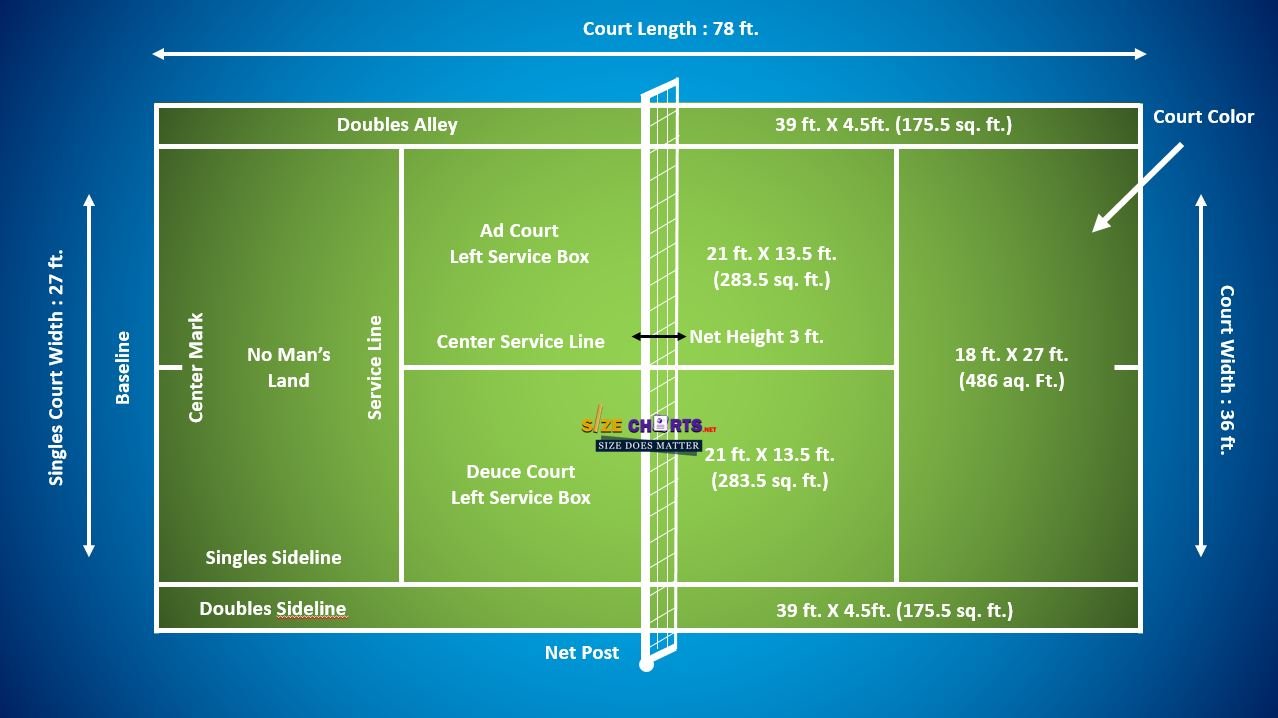 Tennis is one of the most famous worldwide Olympic sports played at every lane and lawn. Whether it is the 19th or the 20th century, Tennis has always been one of the popular games played indoors and outdoors.

The origin of Tennis was from England. It all started on the lawn, and it made its place in Olympics with time. With just two simple pieces of equipment- a tennis racket and a tennis ball, the game can be played, but at a primary level.

One more adds to the list for professional matches, which is the tennis net or the string. With three simple types of equipment, the entire tennis game can be played. During professional tournaments and matches, different kinds of tennis courts are considered. Three different kinds of courts- hard Court, clay Court, and grass court- are considered. Here are the Tennis Measurements.

A Tennis Court can not be only differentiated by the factor of court style. It is also the speed of the court that can be a topic of discussion. Every tennis court isn’t the same. With the variations in the court, it is also the fast and slow court that builds a difference. The court with less friction offers more speed and the tennis court with more friction reduces the sliding effect and makes the court slow.

Another conceptual dimension of the Tennis game is that both the doubles and singles are played on a same court. When singles play, it involves two players on both sides. But when the doubles play, it involves 4 players, two standing on both sides. It means the two players play from a single team. When the players are more the area required will be eventually more and therefore the ITF has set different dimensions for the doubles on the same court.

The lines of the court are yet another proportion of the Tennis Court. In it, there are sidelines, baseline, center service line, and service line.

The line parallel to the length of the court is the sideline. For the singles and doubles, there are different sidelines.

The line parallel to the width of the court is the baseline.

The line across the center of the court is the service line.

Standard Dimension of a Tennis Court. 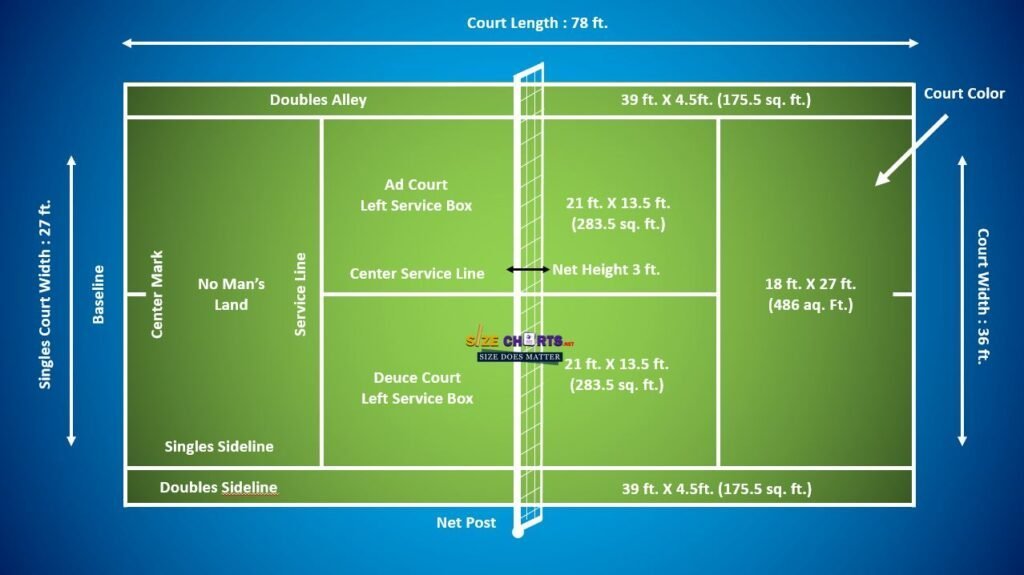 The overall playing area for a doubles court is 312yd² and when the single match is played, the court size is reduced to 234yd².

One of the essential equipment of the Tennis game is its net. It is what splits the tennis court into two equal proportions. The opponent team stays at the other side of the net and the ball is hit from the other side. It has a standard dimension that is followed for singles and doubles.

Besides these, there exist another point of differentiation as well. It is the kind of net. Basically, there are three major kinds of tennis net that are used for professional and recreational games. The variations of it further depend on the absorption factor.

The more energy the ball absorbs, the better it is.

Twisted nets are basically used in indoor games. It is an affordable tennis net that absorbs energy but not to the extent of the braided nets.

Divided into the single braided and double braided net.

Single braided nets are made with polyethylene and polyester. It absorbs energy and protects the same from the harsh UVA and UVB rays. It is used for professional purposes and also for recreational games.

Double braided nets on the other hand, are more durable than the single braided net and more expensive as well. It is because the materials used to braid the net are double. It is the best quality net used for professional games. It absorbs the energy more than any of the nets and goes a long way as well.

Portable nets are best for recreational games, beach tennis, and indoor games. It is a mobile net that can be carried from one place to the other without any hassle. It is flexible in nature and is economical as well.

Standard dimension of a tennis net.

The tennis net must be 12.8m in length and be mounted at the height of 3 feet from the ground.

The tennis ball is another integral piece of sports equipment. It is a spherical object that is hit with the tennis racket. It has a felt coating and is prepared with a high-quality cloth. It incorporates pressurized air inside the hollow rubber core. These are available in colors like white and fluorescent yellow.

There is a different kind of ball for beginners, and for the professionals, it is different. We have a whole other content regarding the topic that you can check out “Lawn Tennis Ball Size, Weight, Measurement & Dimension Guide“.

The tennis ball has its own variation. One of the major types is a pressurized ball and a pressure less ball.

The pressurized ball has compressed air inside its rubber core that creates more bounce.

The pressure-less ball has no pressure inside their food doesn’t cause the expected mounts and is appropriate for beginners and kids.

Apart from this, there are other kinds of tennis balls as well. Some of them are:

Standard Dimension of a Tennis Ball. 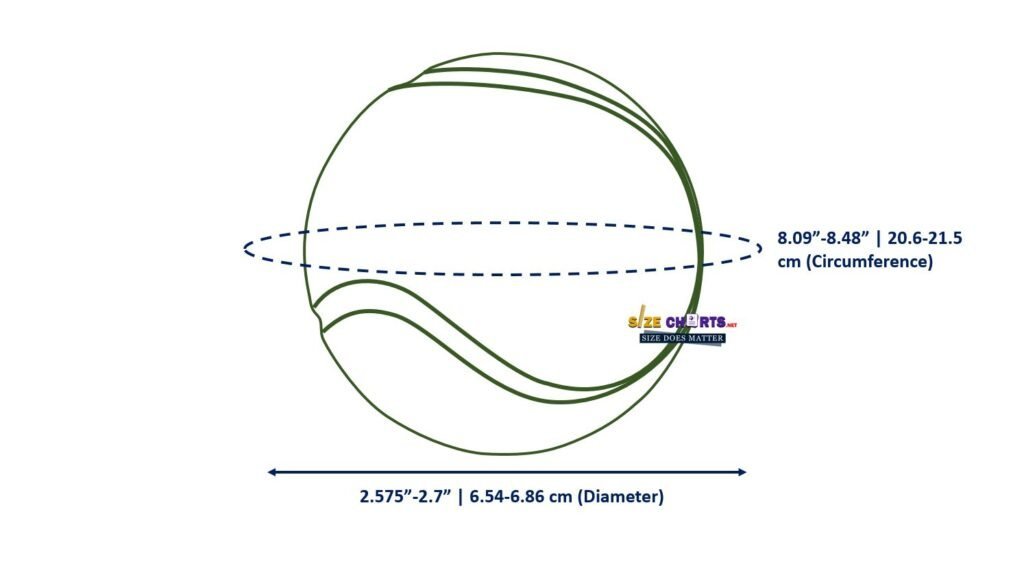 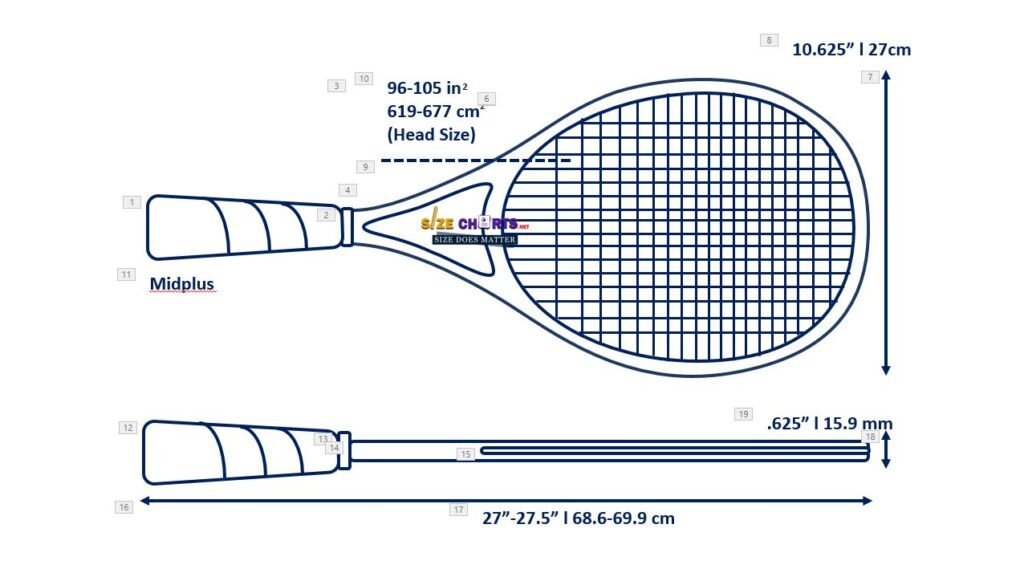 Tennis Racket is another critical piece of equipment without which the game can’t even be played. According to the official guide, a tennis Racket should have standard measurements as follows:

TENNIS RACKET HEAD SIZES: Should be

TENNIS RACKET WEIGHTS: Can be

The tennis fence is an optional element of the Tennis game. It is a secured cover provided to the tennis court, so the tennis ball doesn’t go far away. It might seem like a boundary of the Tennis Court but it is not as potent as the sidelines and the baseline. 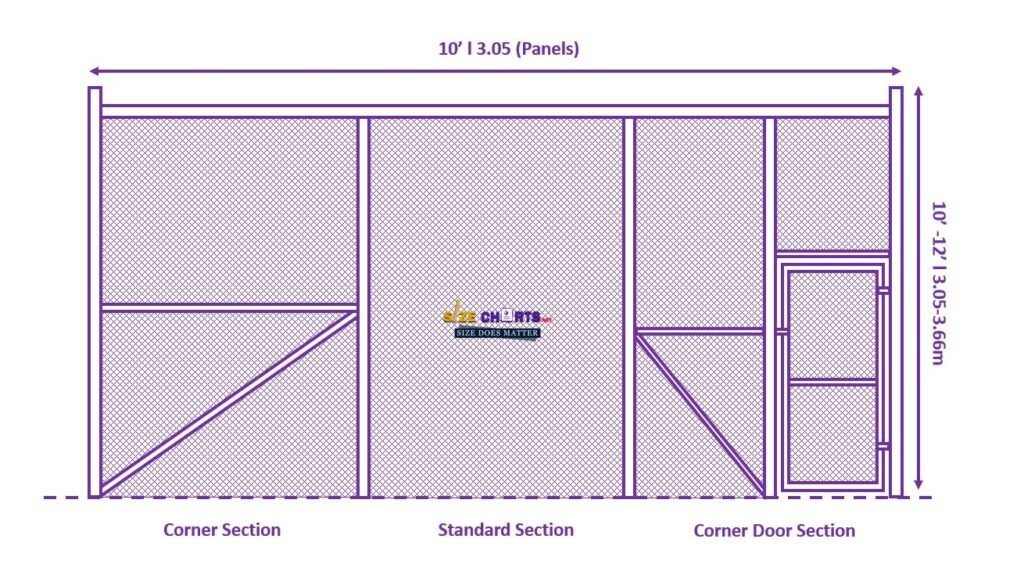 The sideline and the baseline are enough to mark as the boundary of the court; therefore, fencing in the tennis court is considered as an additional case. However, it has its own benefits.

As per the rule, a Tennis fence can be of height within the range of 8 to 10 feet.
But for clay Court, 8 feet heightened fence is good to go for, and 10 feet is good for the hardcourt.